The device itself has a cylindrical shape and is made of quality ABS plastic. No looseness, cricks or assembly fault was discovered when we looked at the particulars. The camera’s eye is on the front surface. The “On” switch is on the left side, the same button is used to switch between video modes of Xiaomi 70mai Dash Cam.

A light-emitting diode display is around the button. The microphone of voice control is also on the left side. On the right side, there is a microSD slot, the charging, and the USB ports, as well as the Reset button.

There are ventilation holes on each side of the device, and they successfully fulfill their functions. No heating of the case was detected within continuous tests with the heat on. The anchorage for mounting the device on the windshield is in the upper part of the device. The anchorage is the same as in sports cameras, but there’s a minor difference: the pitch dimension is not universal and will not coincide with your Aqua Boxes and other devices.

The device is mounted with the 3M™ duct tape. Such mounting has shown itself to be good among sportsmen and became very reliable for car men. The dash cam didn’t fall off the windscreen while moving off road. There’s no LCD display in Xiaomi 70 Minutes Smart WiFi Car DVR, the play mode is available through a smartphone screen on Wi-Fi protocol. There’s a special easy to download and install from Google Play program for it. Unfortunately, the software for iOS is undergoing accreditation in Apple at the moment of the review, though the procedure mustn’t take long. 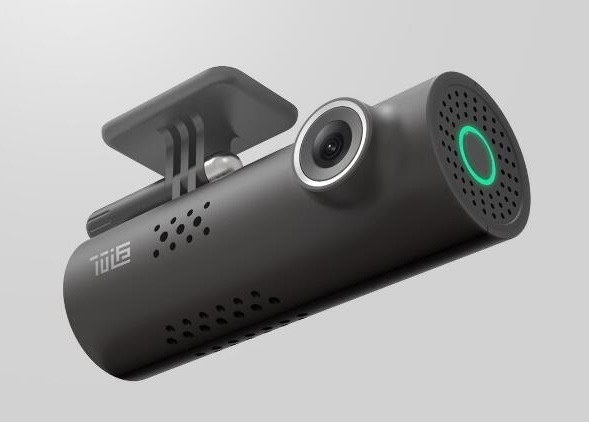 It’s the same as for any budget electronics from Xiaomi. I can’t say the list of equipment is rich, but it contains all you need.

70mai Dash Cam adapter with car charger outlet 12/24V 2.4 will suit both passenger cars and trucks, and the current intensity will cope with charging even a tablet.

The 3.5 meter-long USB cable v2.0 will allow you to comfortably hide it under the auto upholstery.

The windscreen sticker will let you securely consolidate the cam. Unfortunately, the specification is in Chinese

The angle of viewing: 130 degrees, a wide-angle lens.

The camera is covered with a spherical lens made of glass with a 7-layer cover, which improves the light transmission. There’s a sensor from Sony – the legendary IMX323 –in the cam. Such sensors have shown themselves as reliable and providing a perfect picture even at night time.

The angle of viewing: 130 degrees

There’s some lens distortion, but it’s on the minimum level and won’t cause discomfort while watching the video.

The video compression is made in accordance with the H.264 standard, so the video can be played on any device.

The sensor allows Xiaomi 70mai Dash Cam to “read” the situation the car is in. When the sensor is activated due to a clash or because of another reason, the video file is sent to a separate folder where it cannot be deleted with the device or rerecorded.

Xiaomi 70 Minutes Smart WiFi Car DVR has a built-in battery, not a very big one, only 240 mAh, but definitely enough to finish and store the video in the event of an unforeseen situation, be it a car crash or the electric wiring breakdown.

The power button. With the help of the button, you can not only switch the cam on an off but also control the Wi-Fi module and format the memory card.

We use cookies for the correct operation of the service. Click here
if you do not agree or want to know more.